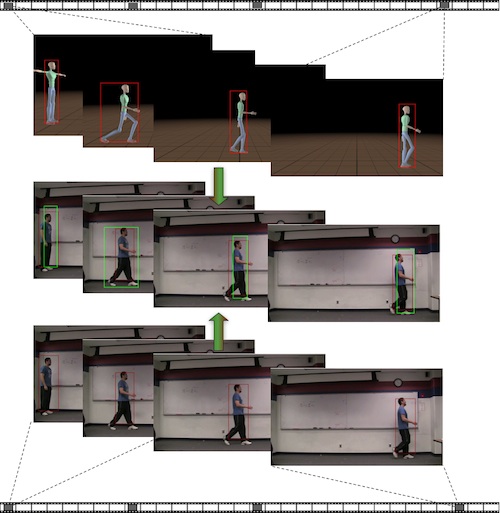 Inferring human activity from images using conventional approaches (e.g., classification based on low level features) is difficult because meaningful activity concepts are abstract at the semantic level and exhibit a very wide range of visual characteristics. Consider the verb "follow." A person may follow another person, a car may follow a motorcycle, a dog may follow its owner, so on. Further, whether the activity "follow" is actually better described as "chase" includes intent which is also not directly linked to low level features. In this project the goal is to develop methods for deep understanding of activity from video.

The image shows an alignment of an activity video (person walking) and a physics based simulator (Cartwheel3D). If we can understand the movie in terms of physics, then we can make natural inferences such as a box that is kicked out the way is light, and one that is tripped over is probably heavy.

This project is a collaboration between researchers specializing at different levels of representation: 1) low level feature based recognition (Deva Ramanan's group at UCI), 2) mid level representations of what actors are in the scene and their trajectories (IVILAB), 3) learning behaviour models from image data (the SISTA robotics lab led by Ian Fasel), and 4) language level semantic understanding of activities (the SISTA AI lab led by project PI, Paul Cohen).

Funded by DARPA through the Mind's Eye Program

This project is developing approaches for learning stochastic 3D geometric models for object categories from image data. Representing objects and their statistical variation in 3D removes the confounds of the imaging process, and is more suitable for understanding the relation of form and function and how the object integrates into scenes.

The image to the right shows a simple model for chairs learned from a modest set of 2D images using the representation of a collection of connected blocks and the key assumption that the topology is consistent across the object category. The particular instances that are fit collaterally are shown in red. For the category we learn the topology and the statistics of the block parameters.

In conjunction with the previous discussed project, we would like to understand scenes in geometric and semantic terms---what is where in 3D. Doing this from a single 2D image involved inferring the parameters of the camera, which can be done assuming a strong model. In this case we adopt the Manhattan world assumption, namely that most long edges are parallel to three principle axes. Different from other work, we develop a generative statistical model for scenes, and rely only on detected edges for inference (for now). 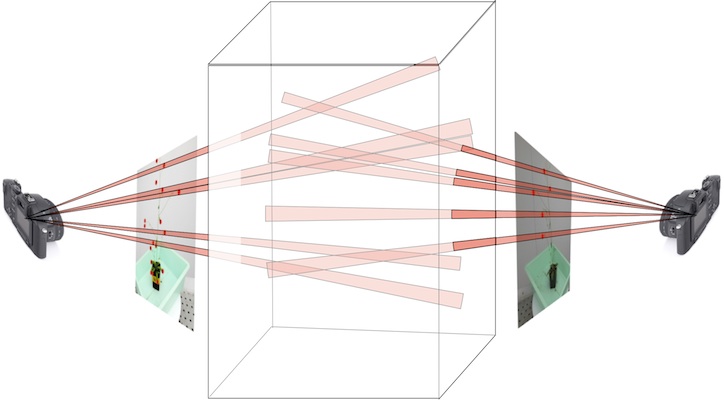 Quantifying plant geometry is critical for understanding how subtle details in form are caused by molecular and environmental changes. Developing automated methods for determining plant structure from images is motivated by the difficulty of extracting these details by human inspection, together with the need for high throughput experiments where we can test against a large number of variables.

To get numbers for structure we fit geometric models of plants to image data. The top picture shows how features detected in multiple views from calibrated cameras can provide hypothesis for structure that become "data-driven" samples in an MCMC approach to fitting structure. The next row shows two views (left), and corresponding fits of the skeleton to the image data, projected using camera models corresponding to those two views. The heavy lifting on this project is being done by PHD student Kyle Simek.

This project is in collaboration with the Palanivelu Lab and Rod Wing's group.

Funding. Kyle has held a Department of Education GAANN fellowship during the first part of this project. He has been helped by undergraduates funded by the NSF iPlant project via 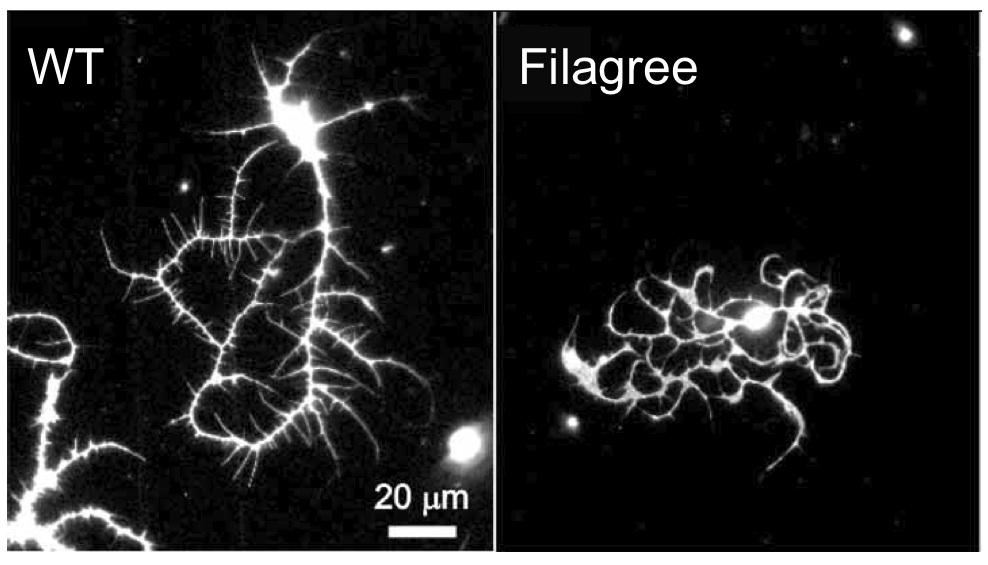 We are developing models for the structure of Drosophila brain neurons grown in culture. Genetic mutations and/or environmental factors can have a big impact on neuron morphology, which in turn effects their function. Automated methods for quantifying the neuron structure will enable large scale screens for drugs that compensate for genetic defects or mitigate the effects of toxins.

The image (*) shows an example of a wild type neuron (left), and a "filagree" phenotype associated with a particular mutation (right). Notice that the filagree neurites exhibit significantly more curvature. We are able to distinguish individuals from these populations relatively reliably using image processing methods to quantify the curvature. However, due to the huge variation in phenotype, developing such a method for each one is impractical. Rather, we are pursuing a structural modeling approach, together with statistical inference to learn the model parameters for each phenotype, and to fit learned models to individuals not used for learning.

This work in collaboration with Linda Restifo and her research group.

Our goal in this project is to learn and fit structure models for microscopic filamentous fungus such as those from the genus Alternaria. The data are image sequences taken at stepped focal depths (stacks). The left hand image pair shows two images out of 100. Notice the significant blur due to the limited depth of field. We deal with the blur and exploit the information hidden in it by fitting the microscope point spread function together with the model. The right hand images shows the fit model with the cylinders corresponding to hyphae, and the ellipsoids representing spores.

Initial heavy lifting was done by PHD student Joseph Schlecht, guided by modeling work by undergraduate Kate Taralova (see below). Undergraduate Johnson Truong has worked on a fast approach for computing the blurring for model hypotheses.

Image keywords and captions provide information about what is in the image, but we do not know which words correspond to which image elements. Alternatively, words may provide complementary non-visual information. Dealing with this correspondence problem enables using such data as training data for image understanding and object recognition, and can improve multi-modal searching, browsing, and data mining.

Recent IVILAB work on this topic has focused on aligning image caption or key words with visual features. The images on the right show how specialized object detectors can help improve this (labels for only the 10 largest regions are shown). The second example (right) shows that the object detector for "bird" can be used to align "eagle", given that we can look up the relation between the two using WordNet. Heavy lifting is being done by PHD student Luca del Pero, with a lot of help from undergraduate students Philip Lee, Emily Hartley, and James Magahern.

Link to our "words and pictures" research since 2000.

Support for this project has come from NSF, ONR, and TRIFF. 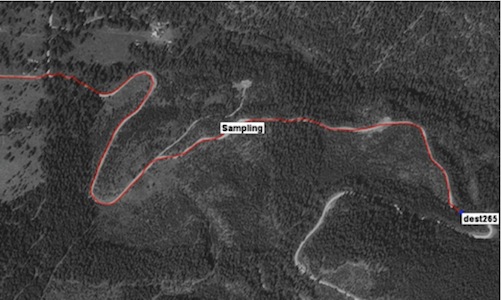 The image to the right shows a satellite photo of a trail with an automatically extracted trail overlaid in red (end points are provided). In this image the method works well, but in general, this is a difficult task as trails are often faint, obscured by trees, and similar in appearance to dry stream beds. Trails both deteriorate over time and also appear due to human activity. The volatile nature of trails makes extracting them from satellite photographs important. In this work we exploit GPS tracks of travellers on trails to train and validate automated methods for extracting them. This work began with Scott Morris's PHD work, and is being extended by Andrew Predoehl.

Funding. Both Scott and Andrew have held Department of Education GAANN fellowships while working on this project. 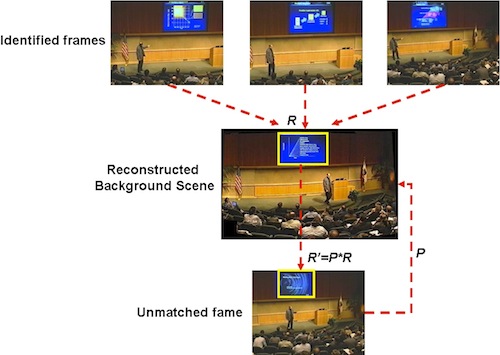 The goal of this project is to make instructional video more accessible to browsing and searching. A key tool for this is to match slide images from presentation files (PPT/PPTX, Keynote, PDF) to videos that use them. We approach this problem by using SIFT keypoint matching under a consistent homography. The figure shows how we can use initial matches to build a background model, which in turn helps us match more difficult frames because we now know where the slide image must be.

For much more information on the project, including publications and a live demo, see the SLIC project page.

Simultaneously tracking many objects with applications to biological growth 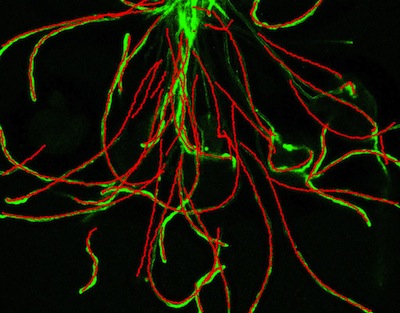 Simultaneously tracking many objects with overlapping trajectories is hard because you do not know which detections belong to which objects. The vision lab has developed a new approach to this problem and has applied it to several kinds of data. For example, the image to the right shows tubes that are growing out of pollen specs (not visible) towards ovules (out of the picture) in an plant fertilization experiment. The paths of the pollen tubes are green, and the tracks automatically found are superimposed in red.

We are currently working on a statistical model for pollen tube / ovule interaction behaviour given the tracks. This work is being led by PHD student Ernesto Brau with help from undergraduate researcher Phil Lee.

This project is in collaboration with the Palanivelu lab.

Funding for this project provided by NSF grant IOS-0723421.

CAD models provide the 3D structure of many man made objects such as machine parts. This projects aims to find objects in images based on these models. However, since the data is most readily available as triangular meshes, 3D features that are useful for matching 2D images must be extracted from mesh data. Having done that, we need fast methods to match to them to images. Applications of this work include identifying parts in machinery maintenance facilities and finding possible manufactured parts based on user sketches.

This project is being let by PHD student Luca del Pero, with a lot of help from undergraduates Emily Hartley and Andrew Emmott.

The image to the right is a labeled model of the fungus Alternaria generated by a stochastic L-system built by undergraduate researcher Kate Taralova. For more information, follow this link. This project continues as part of the plant modeling project. 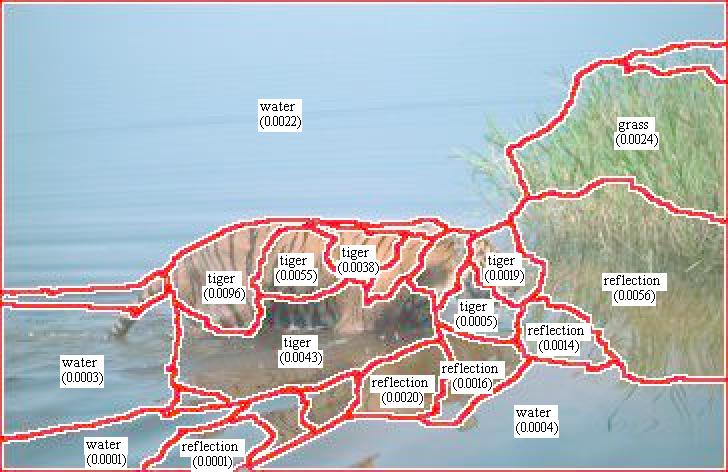 We have developed a scoring system which gives each ground truth region a score for every word. To apply these maps, we use them to provide scores for any given, typically imperfect, segmentation used by region labeling algorithms. The image to right shows a normalized cuts based segmentation of an image together with the score for the maximal scoring word which is also used to label the image. Notice that the reflection of the tiger is merged with the tiger, and so this region will have non-negligible score for both tiger and water, and necessarily less that than a pure tiger region of comparable size. The base scoring attached to the ground truth labeling takes into account the frequency of the concept in the training data and the specificity of the word ("tiger" scores more than "cat") computed using WordNet. This approach allows us to compute both "frequency correct" and "semantic range" scores on pure visual information, which are honest with respect to prior probabilities and the trade-off between specificity and expected rate of mistakes. The "frequency correct" score rewards getting lots of labels correct, which is often the result of doing well on common words such as "sky" and "water". The semantic range score provides equal weight for each word, and provides a measure of how well systems handle rare words. 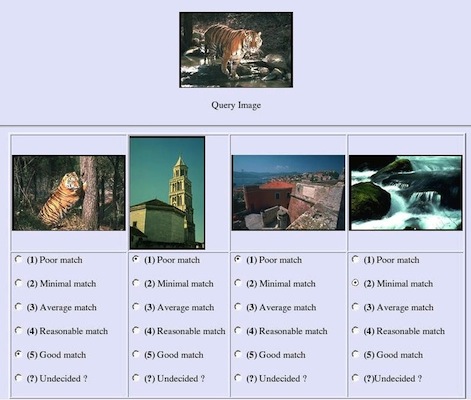 The endeavour to build the Large Synoptic Survey Telescope (LSST) project is a huge undertaking. See lsst.org for details. Not surprisingly, a significant part of the system is the data processing pipeline. We have worked on the temporal linking observations of objects assumed to be asteroids to establish orbits and build data systems for querying the emerging time/space catalog. One of the goals of this research is to help identify potentially hazardous asteroids. This is joint work with Alon Efrat, Bongki Moon, and the many individuals working on the LSST project.